The American Working Terrier Association (AWTA) was founded in 1971 by Patricia Adams Lent in order to encourage and promote the breeding, hunting, and ownership of terriers of the correct size, conformation, and character to perform as working terriers. From modest beginnings, the organization has grown to include over two hundred members and holds field trials across the country and throughout the year. 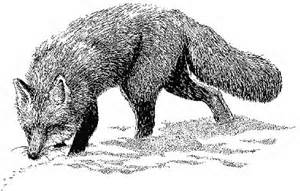 By promoting the use of terriers and dachshunds for earth work and above ground hunting, the American Working Terrier Association hopes to encourage breeders to retain the hunting instincts which make these breeds characteristically “terriers”. Without the opportunity to test the instincts so vital to these breeds, dachshunds and terriers would cease to be the working dogs they were meant to be; something already too common in many terrier breeds selectively bred for dog shows alone. 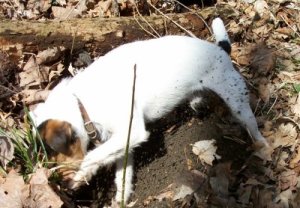 The main objective of the AWTA is to encourage terrier and dachshund owners into the hunt field with their dogs. As an educational aid and to disseminate information to the membership, the quarterly magazine, Down to Earth will post AWTA trial dates, the latest recipients of certificates, and any other information of relevance to the objectives of the AWTA.

Breeds Recognized by the AWTA 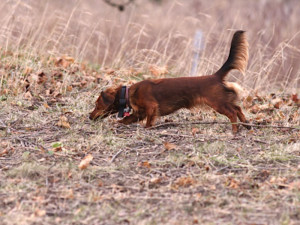 Any individual Feist, Rat terrier, terrier-cross, dachshund-cross or terrier of a breed not mentioned above who is of suitable size to fit in a nine-inch artificial earth may also be entered in den trials. In the certificate class (open to dogs and bitches who have already earned a Certificate of Gameness) these dogs will compete for High Scoring in Breed against each other in a miscellaneous category. The miscellaneous category may be divided into short-legged (12” and under) and long-legged (over 12”) at the discretion of the trial chairman.

For hunting (both in natural earths and above ground) and for above ground hunting tests the AWTA recognizes all of the above listed breeds and miscellaneous terriers plus the breeds of the terrier group of any of the major national all-breed kennel clubs (such as the AKC, UKC, CKC, KC, FCI) and their crosses.

Become a member of the American Working Terrier Association. Enter or renew your membership online.

Learn about the different working and hunting certificates you and your dog can earn.

Read More
The American Working Terrier Association (AWTA) was founded to encourage and promote the breeding, hunting, and ownership of terriers of the correct size, conformation, and character to perform as working terriers.

The main objective of the AWTA is to encourage terrier and dachshund owners into the hunt field with their dogs.

Become a member of the American Working Terrier Association. You can enter or renew your membership online.Yearly memberships are only $20 (single), $25 (couple) or $10/$17 (junior).

We have several products that are available for purchase in our store.